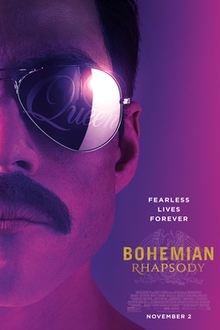 Music biopics usually tend to follow a pretty straight-edged formula. The band or singer has humble roots and slowly starts to rise to fame. Soon after achieving stardom, complications ensue, the lead gets a big head and/or dissociates themselves with the others, certain influences take reign and basically a rift forms. After hitting rock bottom, the lead eventually reunites with their mates and returns to former glory. It’s been done a million times, it’s been parodied even. I remember watching the first trailer for Bohemian Rhapsody and getting excited though. A movie about the band Queen and the life of Freddie Mercury sounded like a fine idea. Maybe it would tell a new story, one that would do proper homage to a great band and a great man. Then where, oh where, did Bohemian Rhapsody go so wrong?

Bohemian Rhapsody has surprisingly been winning awards but not all of them are undeserving. Rami Malek is perhaps the only saving light in the film, with an excellent portrayal of Mercury. When all else goes down the drain, Malek is the one who takes the scene and commands it. It’s a great performance from him.

The film itself though is a mess. Honestly it is. It latches itself onto the formula tracks and chugs along at such a sluggish pace that I actually checked my watch several times throughout the movie. Not a good sign. One of my main concerns was that it reduces Freddie Mercury and his story to such safe territory. Positive queer relationships such as those with Jim Hutton, his longtime partner, are left to a footnote. His family and fellow band mates are seen only when needed, one-dimensional and completely void of development. Queen’s greatness as band is propagated by a hit single played every five minutes throughout. In one sequence, the names of U.S. cities are thrown across the scene haphazardly in retro style texts to indicate an international tour for the band. That’s the kind of the movie this is.

I understand liberties have to be taken when depicting history but some of the inaccuracies in the film are so glaring. While I appreciated the decision to have the story lead up to the historic 1985 Live Aid performance, to have Mercury discover his AIDS diagnosis beforehand, instead of a few years afterwards, feels explicitly insensitive. To have that be a turning point in the film for the characters and their conflict is just exploitative.

The whole Live Aid performance, while exceptionally shot, felt overlong too. I was devoid of any emotion by the end. And here is my other concern: I really felt nothing. Obviously that shouldn’t be the case with a soundtrack filled with Queen and a vibrant Mercury, but I never felt inspired, or excited, or even the basic sad or happy. I sat placid in my seat and eventually waited for it to be over.

ALL IN ALL: Queen deserves a better movie than Bohemian Rhapsody

On the Ticket Stub Love scale, I give Bohemian Rhapsody 2 ticket stubs

Director: Bryan Singer (I mean he got fired, so really I want to credit Dexter Fletcher)