Hey! Long time no see! First I want to apologize for my lack of content in 2018. To be honest, I got into a funk and really couldn’t bring myself to post that much. One of my goals for this new year is to get back into writing. Hopefully I can do more reviews and maybe even update the site a little bit. With award season starting up again, I knew I needed to do my usual coverage so this is great motivation. Thanks to those still reading!

The Golden Globes were this past Sunday and I’ve got to say, I was pretty surprised with many of the winners. It was an interesting show. Andy Samberg and Sandra Oh did an ok job as hosts; some jokes fell flat but their great personalities made up for it.

I live tweeted throughout the show so check out my twitter feed for some of my opinions and reactions. As per usual, I’ll highlight some winners and then move on to the red carpet segment at the end. My ballot was trash this year so I’m not going to share my mostly wrong predictions!

Moving on to the Red Carpet! Our special guest correspondent Amanda A has joined us again this year to give her favorite and least favorite picks!

I love the pants!

I actually didn’t like this dress when I first saw it, but it grew on me. I love the sash and she looks naturally pretty.

Halle is always so fine.

That color! That shine!

That color! That train!

Business in the front, party in the back.

I’m about to buy me some Activia if it’ll make me look that good.

Because her hair matched her dress and that takes effort.

The bottom half is nice but the top half doesn’t really match.

He deserved to win but I’m not feeling the flowered jacket.

Thank you again to Amanda A for her red carpet correspondence. Hope everyone enjoyed the Golden Globes and make sure to check back for more award season coverage!

Awards season is finally here people! The Golden Globes were this past Sunday and the resounding theme of the night was TIME’S UP! From actresses wearing black on the red carpet to riveting speeches calling for change in response to the major sexual harassment issues in the workplace, the Golden Globes this year definitely had a more serious, but hopeful tone. Seth Meyers to me was a forgettable host because in the end, it was not about the jokes but more about the message being put forth by the winners and those in attendance. There were some great winners and surprises though! Perhaps my, and maybe everyone else’s, favorite moment of the night was Oprah’s incredible speech as she accepted the Cecille B. DeMille award. I believe everyone should take the time to watch or read her words so please do!

Also, for more of my opinions and live reactions to the show, make sure to check out TSL’s live twitter feed from yesterday!

Typing out all the winners is a lot of work, so check out the full list here!

So I actually considered not doing a Red Carpet segment for this year’s post just because I figured the red carpet was not meant to be the focus of the evening. Then I realized how wrong I was. By wearing black, actresses brought even more attention to what they were wearing and united under a common front. This year’s fashion was more important than ever! So joining us again is Amanda A. highlighting a few of our favorite looks.

So classy with the feathered sleeves and sheer overlay. I feel the need to pull her chair out for her and call her madam.

Liked the front and then she turned around and I loved the back!

That lace! What a bombshell

Mariah is flawless and I don’t know anyone else.

That train! And that slit!

Love the shimmer and the shoes

Sunning and so unique!

Thanks for joining us Amanda A! That’s the end of our Golden Globe coverage for this year! Next stop: SAG Awards on January 21st.

Yay awards season is finally here! First up we had the Golden Globes Sunday night hosted by Jimmy Fallon. The show as a whole was OK. There were not a lot of funny moments so to say, but more so memorable ones with some great winners and some amazing speeches (Meryl!!). Jimmy Fallon I thought was an alright host. I loved the opening La La Land inspired sequence but other than that and Questlove, he really did not bring anything new to the table.

Make sure to check out TSL’s live twitter feed from yesterday’s show for more of my reactions and opinions about the show!

Typing all this out is a lot of work so check out the full list of winners here.

Now onto my other favorite part of awards season: THE RED CARPET!

Joining us again this year with her red carpet picks is Amanda A!

My favorite look of the night. I dream about this dress, I am obsessed with this dress. It is absolutely gorgeous!

YELLOWWWW, it’s bright and it’s a risk but Viola pulls it off exceptionally

I thought the color was kind of drab on this one actually. The stars make up for it though.

Liked the cape and cut

Was not a fan of the color, cut, or design at all

Get those ruffles out of here! Zoe Saldana’s looks are often hit or miss with me.

Those sleeves though..I’m not sure if the dress would be much better without them though.

Sorry Amanda A, I know you like this dress but it just didn’t cut it for me. I like the black details the more I look at it, but the dress as a whole disappointed me.

Surprising number of great dresses on the carpet last night! It was extremely hard to narrow them down this time. Loved to see some of these ladies taking risks with their fashion choices that paid off.

Tell me who else pulls off highlighter yellow like that?

This dress is getting a lot of undeserved hate, but I love the different colors and the detail.
Emma Stone in Valentino Haute Couture

Such a pretty color on her and I love the stars!
Issa Rae in Christian Siriano

She looked like a goddess!
Lily Collins in Zuhair Murad

A classic and elegant look
Ruth Negga in Louis Vuitton

So unique and she pulled it off.
Evan Rachel Wood in custom Altuzarra

The fit of this suit is amazing.
WORST

A bit too low cut and she doesn’t have much to show for it.

Was she trying to pay homage to Princess Leia? Idk

Looked kinda like a bedspread. Not feeling the color, cut, or details 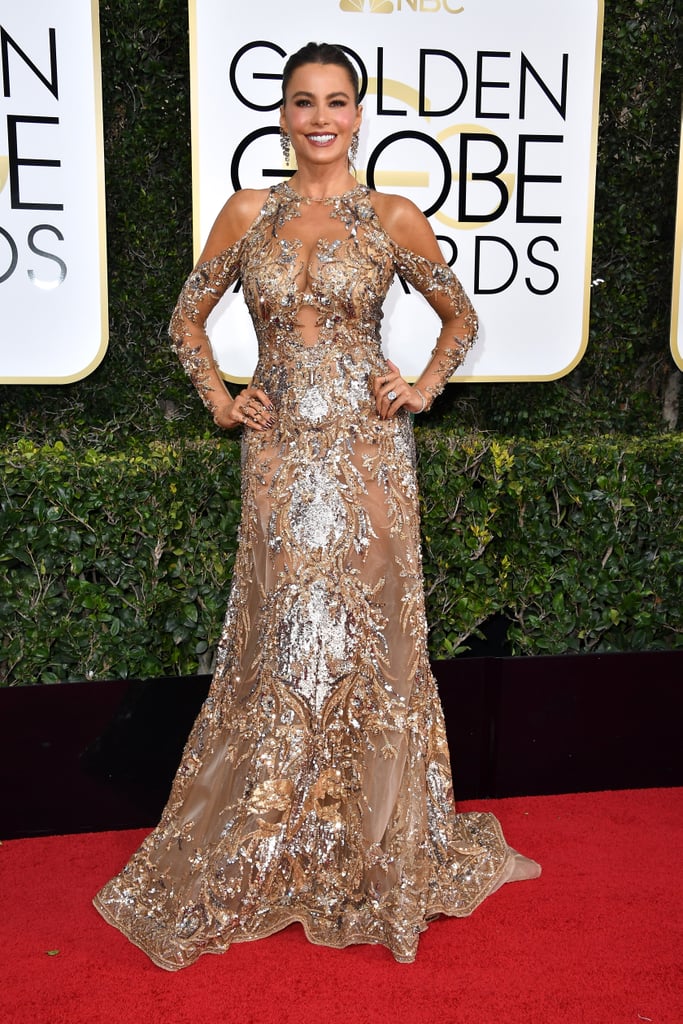 Eh a bit much

That’s the end of our Golden Globes coverage! Special thanks to Amanda A for her red carpet picks and to Asha A for watching the show with me again! We’ll be back for the SAG awards Saturday, January 29th.

Hellooooo!!!!! It is finally my favorite time of the year: AWARD SEASON! To start us off was yesterday’s Golden Globes, hosted by Ricky Gervais. Ricky…well..uh…let’s see…he was Ricky to say the least. I honestly do not understand why the HFPA asked him to come back for the fourth time to host the Globes because he was not necessarily that funny and was more cringe worthy if anything. That aside, the Globes yesterday were fantastic because of all the amazing winners!

Make sure to check out TSL’s live twitter feed from yesterday’s show for more of my reactions and opinions about the show!

Okay so I do not really feel like typing out the rest so check out the full list of winners here.

On to my other favorite part of award season: THE RED CARPET!

This time around we have a very special guest Amanda A joining us with her Red Carpet picks as well so let’s see if any of ours overlap!

My favorite! I love the cut of the dress and the shine, she looks like a Golden Globe.

Love that color on her, matches her hair!

Another white dress that I loved, mainly because of the fierce lady rocking it!

Okay I’m sorry, I know not everyone loved this look but I surprisingly like it for some reason. It just seems like something Kate Hudson would wear and you know, if I had a bod like hers, I would show it off too!

Very classy! Even though I am still a bit surprised by her win, I do appreciate how much her style has evolved.

More white! I love the flow of this dress though.

Unique silhouette and a great color on her.

Beautiful color on her and a great neckline. She looks like the night sky.

Got to give it up for J.Lo. She looks classy for once. Her dress is a great color and the shape is unique and interesting.

Simple yet sparkly…my favorite. Actually reminds me of my prom dress which was the same color as my hair too.

Love Laverne and love the way this dress flows on her. So chic!

That look is so classy! How dare Leo laugh at her for winning an award! She still looks kinda scary though.

Melissa McCarthy in a dress of her own design

Props to her for designing her own dress. It’s flattering and I like its shine. It kinda looks like a trash bag though.

Looks like a nightgown and her hair is too retro.

What was she thinking? She is at the Golden Globes not the club!

This dress looks like a tablecloth or a sofa covering. Sorry I just thought it wasn’t glam enough.

Ok so that’s the end of our Golden Globes coverage! Special thanks to Amanda A for her red carpet picks and to Asha A for watching the show with me! We’ll be back for the SAG awards Saturday, January 30th. How’s everyone doing? Long time, no see! So I’m going to get right down to the point here, before this award season, I had very to little interest in the movies nominated. It definitely seemed like a lackluster award season, but now I am actually getting pretty excited. There are some pretty good movies out right now (my challenge: see all Oscar best pic nominated before the show on 2/22)!

So I Tina Fey and Amy Poehler hosted the show for the 3rd and last time. Overall I thought it was a pretty good show. The duo was funny but I felt like they really played those North Korea and Bill Cosby jokes to the point where it got cringe-worthy but hey Tina and Amy rock so…

Yes so let us finally get down to the best part….THE RED CARPET!

Honestly, there were’t too many looks that I really loved this year.

That concludes our Golden Globe coverage, join us next time for the SAG awards on January 25th!